The story of how we absolutely nailed our first game. 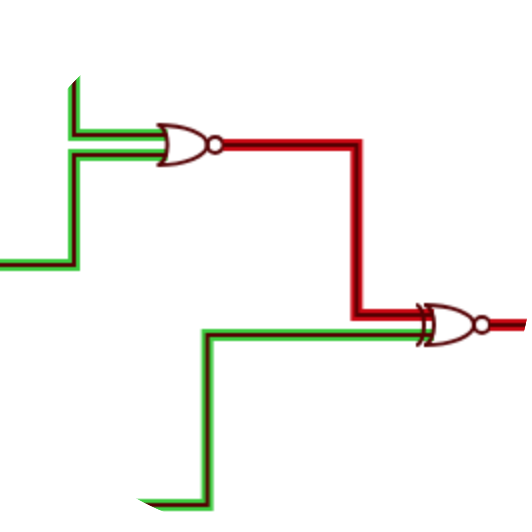 Circuit Simulator really is a simulator for electrical circuits, calling it a sandbox is even a stretch. You can toggle the input and logic gates in the circuit and they you get to see what happens. That’s it. Has some cute interactivity, but there really isn’t a goal, just, “explore logic! Learning is fun!”. A noble cause, but not particularly engaging.

Sam and I picked it up in October of 2015. We had each worked on a few small games, and had planned ideas together, but this was our first time coding together. We decided on the most vanilla JS possible, with a goal of producing something over worrying about pushing our boundaries too much. You can see the origins of these blossoming, young professional devs in the CircuitGame Repo.

Solving circuit diagrams in school was one of the few things I liked about the electrical engineering classes I took, so I figured everyone felt that way :face-palm:. The first pass at circuit simulator was not only impossible, but it was completely devoid of fun. We called it a smashing success.

It can’t be known exactly how the topic came up, but Sam and I were talking about how much fun it would be to make a game about electrical circuits. Much white boarding and coding on the couch together ensued. The really exciting part of development was that each circuit was a Directed Acyclic Graph, which meant Sam and I got to write fun recursive functions. This was the main motivator for the project, we never really thought about how someone might “play” these circuits.

In just a few days, Sam produced a great engine to create solvable circuits. At the same time, I was working on UI generation tool that could traverse the graphs that Sam produced and render a nice little interactive circuit diagram. That was the whole game, given a graph, draw it, toggle the gates and see if they user had won. We had a very loose definition of winning here. We had some serious fire about this project, hence all of the haste to build without much forethought.

Somewhere amidst all of this fun and excitement, it turns out the most people don’t really like to solve circuit diagrams… I was so enamored by the nice Paintbrush-created logic gate icons, that I never realized that the purpose of a game is to accomplish something, not just enjoy the crispness of the icons. At the end of the day, we had created a real franken-game. Existing somewhere between proud, embarrassed, and bullishly ignorant, we published the game on our original site under the title Circuit Game. It wasn’t actually a game, but the effort was in, and there was a feeling of accomplishment that spread throughout the Mansion (our house), like a furtive pee in the ocean, despite the weird outcome.

Recently, the team went to an game developer conference in boston (Boston Fig). While we were there, I heard an interesting take on game development, where a game is…

As Sam pointed out, “if the metric is unnecessariness [sic], then this is the best Game ever created.”. That being said, I’m back on the side of calling Circuit Simulator a game, and it’s going in the game category gosh-darnit!

In the end, you may not love simulating circuits, but you will be able to feel our misplaced love and determination. Don’t be shy, go play!

In loving memory of the Circuit Game idea,